While what’s most immediately striking about the Badlands National Park is of course the sheer stature of it’s rock formations, the more green parts of it, are home to a variety of beasts and critters alike.

The one everyone get’s excited about is the Buffalo, though no one there actually calls them that, they are in fact, Bison. But these Bison seem a lucky thing to see on your visit, as they alluded us during the greater majority of our time there. Buffalo, bighorn sheep, coyotes, prairie dogs, mule deer, rattlesnakes, turkey vultures, and grouse, all inhabit these 244,000 acres of Badlands.

In the rockier trails you can find a good deal of signage that suggests weariness of things like rattlesnakes, and across the whole park there is a stern advising to back away from any wildlife you might encounter. The phrasing was always such that you were supposed to fear the animals, rather than demonizing our human impact upon their lives, which was interesting and provided a distinct Jurassic Park feel.

In the daylight we only ever encountered a herd of Bighorn Sheep, situated at the top of a hill on the roadside. We later returned to this hillside for the sunset, and upon leaving the park at night, finally saw a Bison by the exit.

The Badlands National Park, is home to great deal of history like any other place. However with the Badlands, this history is plainly put out in the open for any to see, and it is truly undeniable.

Badlands National Park, like any other national park, is largely composed of various trails to hike on. That was my chosen means of exploration as a tourist in this part of South Dakota.

As one enters the Badlands National Park through exit 131, you drive up a long strip of pavement through very flatlands, until the pavement begins gathering a slight incline. Soon enough you’re approaching the first chunk of rock on the prairie. This rock formation offers the first few trail heads, the Door, Window, Notch, and Castle trails.

The castle trail is truly massive, and thus was not one we dared attempt. The Door and Notch trails however offer a very playground-like sense of exploring the canyon-like terrain of the Badlands.

The Notch trail was a trail that began with rickety wooden rope ladder that laid against a wall of rock. From there you would cling to the edge of the rock, and walk to a greater opening. From there on you’re basically clambering up and down slopes of rock, like multi-leveled bowl of rock. At the end of it, you reach the edge of that bowl, which reveals a startling overlook of the grand expanse of the Badlands.

This sort of wild and grandiose scenery was entirely unfamiliar to me. Climbing a rope ladder was daunting, clinging to the side of a cliff was nerve-racking, and looking down to see ground hundreds of feet below me and a distance that stretched miles upon miles before, was a kind of beautiful threat to my existence I could not ignore.

With this introduction I felt truly OUT of place in fact, and in that vulnerability I began to feel something of a sense for this place.

Badlands National Park is situated in South Dakota by the Pine Ridge Reservation.

I came across the Badlands National Park while traveling cross-country this past summer. My friend and I had just left the more metropolitan twin cities of Minnesota, when our drive bled into vast prairie land and rocky canyons. My time in the Badlands was in fact quite short, and by no means a visit with any sort extended exposure. However I believe this notion of sense of place, can be found equally as in the immediate and striking introduction of a new place as one would in growing accustomed to one for an extended time.

Places like the Badlands, offer such immense stature as compared to most of our day-to-day places. Growing up on the east coast in the metropolitan DC area, these sorts of places were entirely foreign to me.

Lake Needwood, aside from being the lake and forestry that crept into my neighborhood, is a rather popular park. When one enters Lake Needwood from the road and not through the woods, things are more domestic. There’s a bathroom, a pavilion, a picnic area, all along the single strip of pavement that ventures far enough into the park. Further in you’ll find the docs where there are boat rentals.

With this distinction that you can see in just the modes of arrival at LakeNeedwood, there was always relative contemplation to it as a place. While on my own time, taking walks with friends and family through the woods of our neighborhood, LakeNeedwood was more a point of meditation than anything else. The same way Romantics in all those masterpiece classics would wander into nature, my english-teacher mother, bookworm sister, and I would also wander.

But with introduction to school, there were even class groups that would go to Lake Needwood as a field trip. Or friends who didn’t live in my Neighborhood but would still drive to Lake Needwood rather than wander. In this perspective, Lake Needwood was a city park, one made for entertainment and outings, where you might bring your kids to get in a paddle-boat or eat a pic-nic or even exercise.

There will always be this distinction about Lake Needwood, in that it exists as just a piece of land full of woods and accompanied by a lake, but also as park categorized by districting and bureaucratic-affiliation. 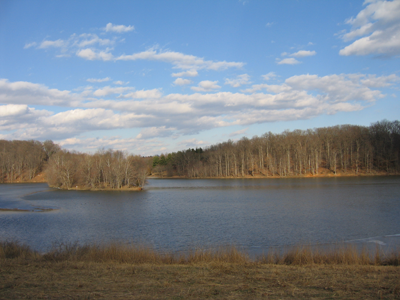